In addition to the three Ina recipes I cooked for dinner, I also made two loaves of bread. These were NOT Ina recipes, so I won’t go into detail. But, all I can say is….I’m exhausted!!

Reviews of the recipes I made tonight will be posting starting tomorrow.

This week I will be making three recipes!

The main course will be Parmesan Chicken from Family Style.

I will be serving it with two side dishes. For a vegetable, I’ll be preparing Orange-Honey Glazed Carrots (At Home) and for a starch, I’ll be making Buttermilk Mashed Potatoes (At Home).

I may modify some of the recipes a little bit to cut down on the ingredients needed to be purchased. For example, I will only be using the amount of buttermilk I have left from last week (about a half cup) and not buying anymore. So I’ll be short a bit for the recipe, but I also plan to not make the full amount the recipe yields.

Pics (hopefully!) and reviews to come!! 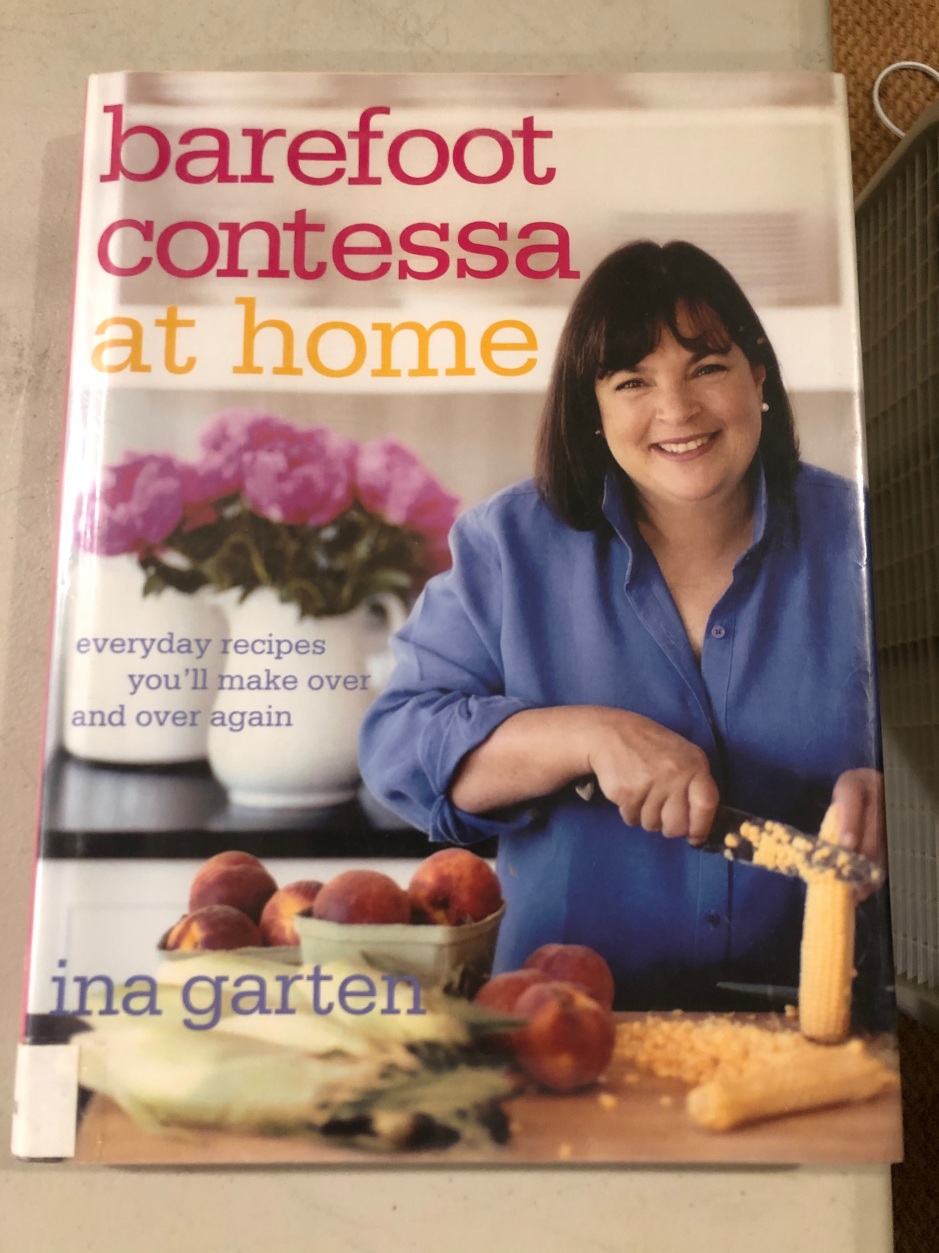 Garten’s fifth cookbook begins what I call “Quintessential Ina.” This was around the time I discovered and fell in love with her cooking show. And I think her best recipes stem from the next few books. The tagline “everyday recipes you’ll make over and over again” rings true for this book since Ina had finally settled into her target audience: untrained, home cooks.

END_OF_DOCUMENT_TOKEN_TO_BE_REPLACED

Today is a rainy, cold, end-of-October day here in Connecticut. We’ve barely seen the sun over the last two weeks and they are expecting snow (!) tomorrow. I’m not really a fan of snow, but thankfully I am off from work that day.

Sadly, the time got away from me this week, so the next cookbook review will be delayed until later this evening.

I am still thinking of things to make this weekend. I am leaning towards a chicken recipe and some type of side…possibly vegetable or maybe risotto! But definitely, no dessert this week! I had to throw out roughly half the cake I made last Friday. No one was eating it and I already had more than my fair share.

This week, I will be cooking on Saturday instead of Friday. I still do not know what I plan to make. This week, I’m going to try to do more than one recipe. Again, I probably will not be doing dessert. However, I am toying with doing an appetizer recipe this week!

“The most overrated tool: a pasta maker. Why make it when you can buy it? It’s a lot of work!”

This recipe is NOT from Ina Garten, but I wanted to show off what I made because I was really pleased with myself and how it turned out! If interested, this recipe came from Sally’s Baking Addiction. The photos are mine, however. (Hers are much, much better!)

Snickerdoodle Cake is my new love! Three layers of cake with snickerdoodle pieces spread throughout, amazing cinnamon buttercream frosting, and just all around happy dancing!

Since this is not an Ina recipe, I will NOT be going into detail about the baking process. But…I do recommend you try this cake for yourself. It was so worth the effort!

Featured in How Easy Is That?

In the headnotes to the recipe, Ina says (and I’m paraphrasing) that everyone needs a quick, easy, and flavorful sauce recipe. And after trying her Weeknight Bolognese I think I’ve found it!

This recipe was super simple. It reminded me of the “old Ina” (which is the Ina I knew and loved before I started this blog) meaning that I always found her recipes to be easy. This sauce recipe came together in a little over 30 minutes but it tastes as though it cooked all day. It also seems adaptable enough to increase the amount made or to omit the beef to make a true marinara-style sauce.

The flavor in this recipe is the real hidden secret.

There are so many layers of flavor in this sauce. I never thought nutmeg in an Italian sauce would taste so good. That is just one of many different flavors. Since I did not have crushed red pepper flakes, I did a quick Google search to try to find something else. I substituted chili powder and I think it only intensified the flavor. Red pepper flakes aside, this recipes uses a lot of black pepper. Which seems to be a theme in Ina’s savory recipes.

Add in some heavy cream, oregano, basil leaves, and red wine and this sauce will surely be a winner for you as well!

I think this one needs to go on the Favorites Lists!

Disclaimer: This post was started early Thursday afternoon and completed Thursday evening. I kept the “stream of consciousness” style so that you can see how my brain actually works when it comes to deciding what to make each week. Sometimes dealing with over 1000 recipes and a dozen cookbooks gets to be overwhelming.

Well, here we are. Friday….again.

Personally, this week was a little tough for me. The weather didn’t help much either. The lack of sun really starts to get to me after two days.

So, I’m looking forward to spending some time in the kitchen this afternoon preparing a tasty meal. I also decided to give Ina’s dessert recipes a little break. No desserts from her books this week, if any dessert is made at all.

That said, I still want to try to do two or three recipes this week.

I am thinking of branching out of my comfort zone and attempting some elegant and very gourmet.

After reviewing Barefoot in Paris yesterday, I realized that I haven’t made any of those recipes yet. So I’m thinking of doing Chicken with Forty Cloves of Garlic.

But then, when I looked over the recipe I realized that this chicken dish will feed a small army. We would have too many leftovers. So, it was back to paging through books to find a recipe that would work.

Which proved to be a bit of a challenge. We had fish already this week, chicken, lasagne, and pot pies. We also had a leftovers night which just repeated those dishes again. I am also hesitant to do anything with beef and lamb. The beef because I’m not a huge fan of it and the lamb because, well….the fear of the unknown. I’ve never had lamb.

After paging through Barefoot in Paris, I realized that it wasn’t going to happen this week. Nothing seemed easy and interested me. So, I picked a few books at random and thumbed through those. Soon enough, I found a recipe in How Easy is That?

Weeknight Bolognese for the win!

Bolognese is a meat sauce that is fairly common in Northern Italy. It’s an easy sauce to make and since it has meat (beef) in it, it helps fill you up.

(Disclaimer: I’m not opposed to beef in its ground form. Hamburgers, meatloafs, meatballs, etc are all OK in my book!)

I decided to use De Cecco pasta since it was on sale this week and use the called for pasta shape. I can’t wait to see how it turns out!

Since I’ve settled on this pasta dish, there will be no side dish or salad from Ina’s books to go with it. And as I’ve mentioned earlier, I won’t be making a dessert this weekend…from Ina that is.

I stumbled upon an amazing cake recipe that I just had to try! That review and write-up will be posted as well, however under a different category entitled “Other Recipes.”

This is part of a 12-part series where I review each of Ina’s cookbooks. A new review drops every Thursday at 1:30 PM. This is the fourth review out of the twelve.

This week I get to talk about my favorite Barefoot Contessa cookbook to date — Barefoot in Paris. This book is different from the others in a few ways. First, this is the only book (so far!) that focusing solely on one type of cuisine: French.